ready to 'rock' the Parkway

It's here.  Well, almost.  As I sit here sniffling and ignoring a tickle in my throat, I find my mind going to back to reminisce this first part of 2012.  How could four months fly by so fast?  How could this winter be so perfect (relatively non-existent) to support my first ever half marathon training?  How can I finally be *ready* to run 13.1 miles?

As I reflect on my previous months of training, it's only natural to look at numbers.  Roughly 240 miles ran so far in 2012.  I kind-of want to say "that's it?" but these miles are almost half of the total miles I ran in 2011, so I feel somewhat accomplished.  These miles were hard, with purpose and intent.  The competitive part of me would love to run 12 miles at least one more time, 'to really make sure I'm ready', but the sensible part of me says "You ARE ready."

My support has been more than amazing.  So many people on Facebook, Twitter and Dailymile have been SO supportive ...ALL THE TIME.  I know I wouldn't be where I am without them....the accountability is huge and their support is priceless.  But, this past week, I've been panicking and have turned to my sister, Amy.  She's listened (endured) my rants and worries all week, one day, I called her 4 or 5 times!  Amy is a former-runner-especial and I know to listen to her tips and advice, I also know one day we will run together again, and I can't wait.  Erin and Barb on Twitter have been beyond-words-amazing.  Again, two more people I'd love to have the pleasure to meet and run alongside (one day).   Logan, you better be reading this.  YOU were the first person to go 'all-in', when I proclaimed on Run Chat that I had decided to do my first half.  I believe you said "I'm going to follow you now, I love watching people tackle new goals" (or something kinda/sorta like that).  Then, there's my parents, my Mom always asking "are you still running" and my Dad reinforcing my running by telling me how great I look...that is so much more inspirational than you can imagine.  Now, I turn to Bob.  He's been my virtual running coach forever now.  (we actually attending the same HS and almost the same time!)  I really don't know if I would have done any of this without his guidance, his continual super-support and advice.  I'd love to run a mile at the speed he can run a mile...I laugh because we're both in Nebraska and I'm planning on running the Omaha Half Marathon and he is, too.  It's going to be hysterical because by the time I'm done, he will have showered and changed and grown a beard.   He's fast, I'm not, but as long as I have his 'support' I'm not worried about speed.  That's the best thing about running a new distance for the first time, a guaranteed PR :)

This sounds like I'm either going to die tomorrow or I'm going to win, I know both aren't going to happen but what I do know...is I'm running my first half marathon and I am ready.   I'm ready to Rock the Parkway in Kansas City! 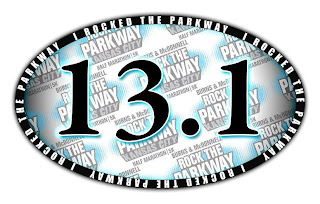