Halfway to Half Training


I'm about halfway through my half marathon training, so I figured it was time for a post.

It's really pretty amazing to me how LAST YEAR I had just begun my weight loss journey and  feeling pretty lucky to walk/run 1-2 miles.  Mostly walked.   I didn't realize I would actually run a 5K in July and wasn't really preparing for it at that time.  My mindset sometimes says, I think 'once an able runner, always an able runner', but when you take months or years off, there's no choice but to start over.  I was totally starting over, completely.

After my miserable 5K in July, I became really, really ill.   Because I was in bed (literally) for two weeks, I lost my stamina and energy but my desire to run was still alive...and I was starting over....again.  I still wanted needed to run, but I knew a new, more demanding goal would only get me to seriously run again.

In fact, I was running a 10K about once a week, our fall was delicious and I loved getting out there...then one day in November, something began to creep into my mind.  Half marathon?

Here I sit halfway into my first half marathon training.  I love it.  Don't get me wrong, it's tough, it pushes me...and I need that.  Long runs are on Saturday and now I run long runs when all the 'real runners' do theirs.  I'm a runner?  I'm a runner.  It's still difficult to call myself that.

I don't know, but I do know that I will. 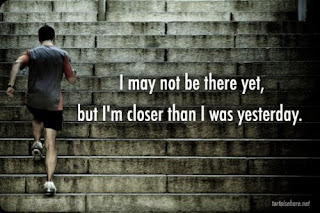 Posted by Lori @ Hit the Ground Running at 5:30 PM