sometimes TV shows are jerks and running can't fix everything

Sometimes television shows are jerks, and they don't even mean it.  Hubby and I watch about eight shows/week.  We DVR them then snuggle up on the couch and have little marathons.  We love 'our shows'.   NCIS, NCIS LA, Criminal Minds, The Mentalist, Dancing with the Stars, Biggest Loser.  We've even added 2 more shows, Up All Night and Modern Family.  As you can see, some shows are about crimes and detective work, some are light and entertaining and some are just flat our hilarious.  The entertainment value is priceless, taking our minds off of the daily grind is always a good thing.

Last night we watched Criminal Minds (one of my favorites), and as usual, it was fairly gripping, twisted and dark.  Hello?  The name says it all.  There were two story lines in the show, one was the bad guy and how he had previously had a terrible after death experience.  The second story line was how a long divorced couple were reunited ... only, she was dying of a terminal disease.  She wanted to die on her own terms, so she took a bottle of pills, and laid her head on her former husband and barely muttered a question to him.   "Do you think he'll be there?"  He held her tight and he was quietly crying, then he assured her, "Yes, I know he'll be there."

Next scene, cemetery.  He is sitting by two headstones, one is hers.  The other is their son - born and died on the same day some thirty years earlier.

My husband grabs my hand and squeezes it so tight, and we both just sit there, choking for air, tears falling, not able to say a word.  We weren't expecting that, clearly.  It took us each a good fifteen minutes to regain composure and to go on with the night.  It wasn't so much the headstone of the baby but more the question of the mother "will he be there?"

We know this is how we both will meet our son and daughter.  In the afterlife.  And I know seven years after losing our first baby, the pain is still so raw and real.   I want to think of them all the time, but it's hard to.  So, when a silly weekly tv show rocks my foundation of cope,  I know it's time for me to think of them again, and, I will.

I will wonder how tall Jonathan would have been and imagine the color of Grace's hair.  In my mind they are the closest of friends, never separating, always smiling and happy.  I will picture the bedrooms they will never have and wonder if they miss us as much as we miss them.   I hope they are happy and warm.  I hope great-grandparents are reading them stories, and hugging them tight.  I long to hear their sweet voices.  To smell their hair, watch them play.

For now, they are forever in my heart, so close yet so far.  I won't ask the question "will they be there?"  because I already know "they will." 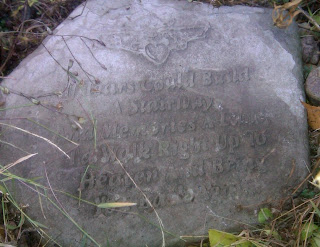 this stone is in my pond landscaping, it makes my heart swell when I see it
Posted by Lori @ Hit the Ground Running at 12:52 PM

Email ThisBlogThis!Share to TwitterShare to FacebookShare to Pinterest
Labels: Jonathan and Grace