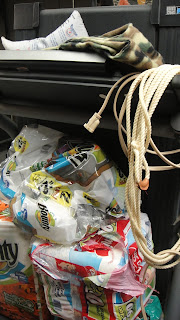 I am nowhere near where Lori is in all of this. I am working my way back into working out on a regular basis, where I was before summer started. I have fallen behind. I was doing my Wii Active 5 days a week and walking at least that many, nothing could stop me from my workouts. Then came summer, I stayed with it for the first part and then came camping and that just completely derailed me. So where am I now? Eating worse, not doing my Wii Active and trying to get into running...slowing and sporadically. I am now in awe of my sister, Lori who is doing an incredible job of training for a 10k and eating healthy. I have my inspiration, I'm definitely not lacking that.

So what's my problem? I think the worst part is a new routine. The kids are back in school and I am going back to work...sort of. I am in a substitute position so there may be some days I'm up all dressed to run and then the phone rings....I'm going to work. So I've got to figure it all out and have a back up plan. I need to dig my treadmill out. I guess I can't use it to hold paper towels, toilet paper, grass seed, an extension cord a lasso and oh yes, our camouflage Snuggie. That way on days when I get called into work, I can get on the treadmill when it's dark.
I do plan on running a 5k on October 22, the Run Scream Run http://runscreamrun.com/. I am running...ok run/walking it with a friend of mine and I need to get my butt in gear! Let's just hope I can stay motivated and do it right this time.
Posted by AmyA at 4:37 PM 3 comments 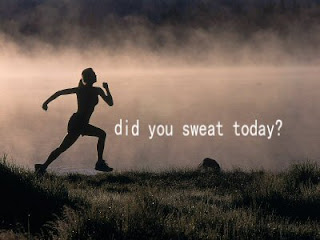 Did you sweat today?  I ran today...I noticed I was almost to the half mile mark when I was already breaking a sweat.  How awesome is that?  So, that took me...about 5-6 minutes to begin sweating.  Sweating means your moving and moving means you're DOING SOMETHING!  What did you do today to get that sweat drippin'?
Posted by Lori @ Hit the Ground Running at 4:18 PM 2 comments 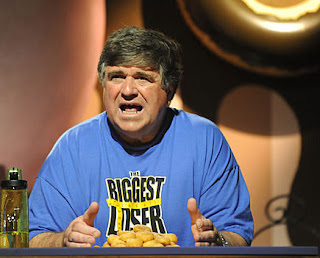 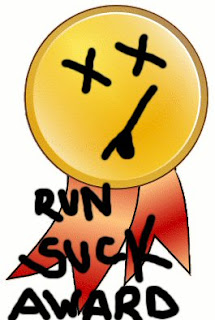 BUT?!  At least I didn't get run over by a John Deere, or bitten by a wild turkey, or fell into a hole to the pits of hell, right?

So?  Not all runs are fabulous and most days aren't easy to 'eat right.'  Just some are much worse than others.
Posted by Lori @ Hit the Ground Running at 9:38 PM 4 comments 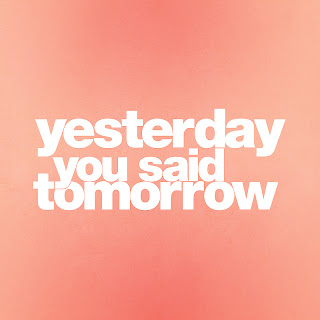 You did.  I did.  We ALL have said this.  So, let's stop.  Start today.  Start NOW.  People say 'tomorrow' or 'Monday'...what's that doing for you?  It allows for another day of cheap eating, another day of not moving, another day of not loving your body.  You don't have to be a size 2 to love your body....but wouldn't you love feeling energetic rather than sluggish?  Wouldn't it be great to feel and see your body changing - is there anything MORE motivating?  No.  Feed your body what it needs, not what you want.  It will change...remember this though "it's a marathon, not a race".  Meet you at the finish line.
Posted by Lori @ Hit the Ground Running at 1:42 PM 2 comments

Lunch...because I'm not a 'turkey sandwich' every day kinda gal

hardest part of this?  Cutting up the veggies.  Just cut the veggies, it's SO WORTH IT. 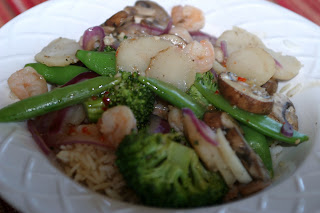 Water chestnuts, sugar snap peas, baby bella mushrooms, broccoli, red onion over a half a cup of whole grain rice, seasoned with fat free italian dressing (measured of course).  Oh, and shrimp!  A long time ago, I decided to no longer purchase 'Smart Ones' or anything of that nature.  Too dang expensive.  I realized since I was not working, I'd create my own 'Weight Watchers friendly meals'....and I'm loving it.  Total points plus value = six!

(get the idea with the veggies?  GO CRAZY!)

in a small frying pan, add olive oil and garlic...dump in your shrimp, dump in all of your veggies, drizzle 2 tablespoons fat free italian dressing, lightly cover, cook over medium heat for 5-7 minutes and tossing every minute or so...and you're done.  Serve over bed of rice and then drizzle another tablespoon of dressing and enjoy!
Posted by Lori @ Hit the Ground Running at 4:43 PM 2 comments

hit the ground running: and...I'm back with a new, more purposeful blog! ...

and...I'm back with a new, more purposeful blog!  I'll quickly recap this year so far...started on yet *another* weight loss journey.  The story of my life, as sad as that is.  I began on 1-11-11, it just seemed so right.  As of today, 9-25-2011, I'm about a pound away from FORTY POUNDS LOST.   Yet?  there's more to go.  I'm on Weight Watchers and that really is a great tool for me to learn how to eat and learn a healthy lifestyle.   I'm realizing fast food is not part of healthy living.  I'm also realizing drinking margaritas aren't in the daily 'five', no matter how many limes are used.  (Hubby calculated calories and carbs of light margarita mix, can you say ... equal to the carbs in four quarter pounders with cheese?)  So, no more.  If I'm going to be 'charged' for four quarter pounders with cheese, I'm sure as hell going to eat one.

Anyway, this blog will have some of my tastiest food recipes, I will discuss wine at times, but more than anything...this blog will reflect my quest to be fit...and that is just so exciting to me.  My new love is running...I just LOVE it.  I'm approaching a 10K, which is something I've never done...but I will do it, and it will be fabulous.

What I would love to get from this new blog...are readers and followers (duh) but why?  Because anyone else fighting the fitness battle, you all inspire ME.   Twitter and Facebook have been a huge, ginormous, huge support group.  I'm held accountable.  I feel as thought I 'report in'.  They care.  They cheer.  They understand.     Then, we can all celebrate healthy together, and plow our way through the workouts... and?  Feel pretty freaking awesome.
Posted by Lori @ Hit the Ground Running at 12:06 AM 3 comments